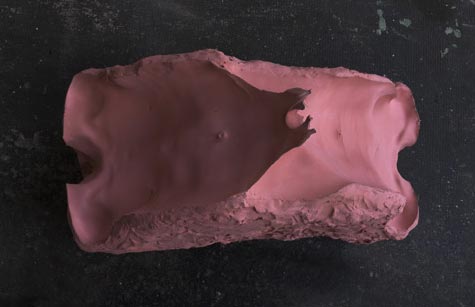 “I was all day in my studio and all my material went through my hands and I moved my body all day and I realised how much I like to be sculptor.”

In the Space Between Two People Having Sex, Gröting has literally covered two actors in plaster from nose to penis to vagina while they are having sex and then conceptually turned them inside out.
What we are left with is the other side or “under side” of our selves.
This trace of a sexual moment is both contemporary and classical – a cross between a sculptural autopsy and a sculpture by Michelangelo.
Uncannily violent and calm in the same moment, the dramaturgy of this work rests somewhere between a staged live performance, a sculptural investigation of inner space, a conceptual and intellectual conversation about physical intimacy.
We know from documentation elsewhere that Gröting’s experiments with ventriloquism (The Inner Voice) focused on the dummy as a sculptural and performative instrument to research the soul. The ventriloquist’s illusion is to appear to have a conversation between two people. In this way the awkward or humiliating conversations we have with our selves can be put into someone else’s mouth.

If the dummy is a sculpture that is animated by the unconscious of the ventriloquist, the space between two people having sex is a de–animated space, its breath and heart–beat frozen in time. At the same time it is also a conversation between two people. A fragment of an untold human story.

The space between sex is a concrete space and a fictional space – sex is always charged with the fictions we make of the other. A great deal of thought has passed through Gröting’s materials in this sculptural conversation about the space between a physical choreography and its hidden psychology. As a trace of an intimate performance, the work asks us to consider the curious dynamic visited upon the man and woman hired by Gröting to enact an intimate act while the plaster froze around them.

Deborah Levy writes across a number of media; fiction, performance and visual culture. She is currently AHRC Fellow at the Royal College of Art, London.